But, if we try to explain Maca’s positive effects on general mood, increased energy level and memory capacity, regulation of the hormonal (endocrine) system, as well as the level of sexual desire, for all of that we can reach for the basic explanations:

1. HERE, IT’S NECESSARY TO INTRODUCE OURSELVES TO THE ACTIVITY OF HYPOTHALAMUS AND HYPOPHYSIS, in order to understand the main mechanism of action of Maca’s secondary metabolites.

The hypothalamus can be considered as a controlling or coordinating part of the entire endocrine (hormonal) system. Namely, he receives “inputs” from the overall status of a man; from temperature and light stimulation to autonomic neural and hormonal system. Such information’s are channelled towards the pituitary (hypophysis) that then produces hormones.

It can be freely said how, so-called feedback between hypothalamus and pituitary gland equilibrates and influence upon the entire homeostasis of the endocrine system. To put it in other words, the potential effect on balancing the effects of the “main software” of the main axis hypothalamus – pituitary gland is at the same time balancing the other organs under the control of this axis: epiphyses, adrenal glands, thyroid, ovaries, testicles and pancreas.

In the context of Maca: in many studies wasn’t observed direct effect on the sexual glands, but modulation effects on the symptoms and condition of other glands such as thyroid glands, and adrenal glands were noticed. The conclusion would be, therefore, that Maca’s secondary metabolites could act “indirectly”, acting on a “higher” level when running the endocrine system.

So Maca does not “bring” to the organism its own hormonal precursors, but through the aforementioned axis, the glands balance the production of their own hormones.

After all, such a basic mechanism of action is often explained in the so called adaptogenic plants such as Maca. 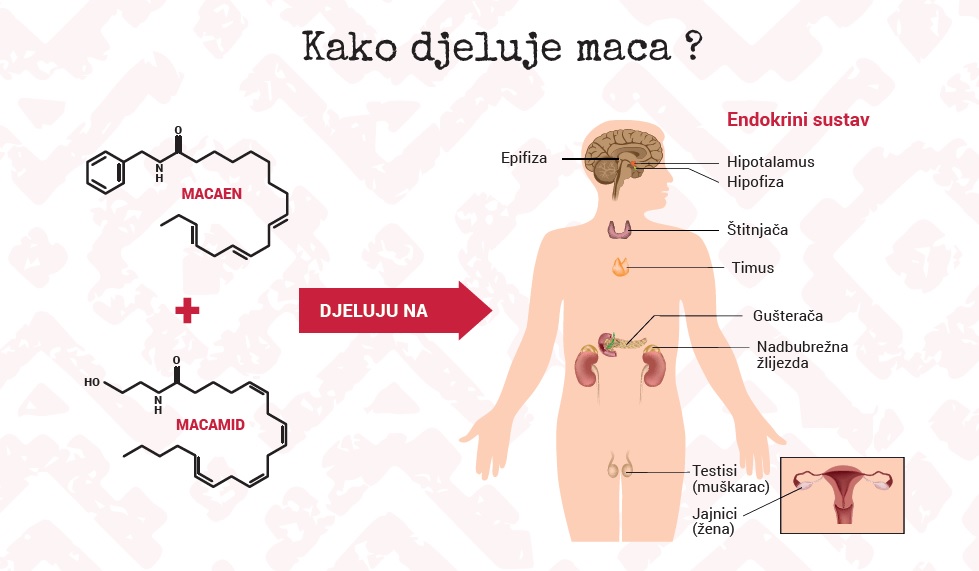 2. NECESSITY TO UNDERSTAND THE ACTIVITY OF THE INNER CANNABINOID SYSTEM IN ORDER to understand the action of the Maca on the host organism

The physiology of man is very complex and is built of many systems that communicate with one another. Such is an endogenous (internal) cannabinoid (endocanabinoid) system. It is a biological system composed of endocannabinoids (which acts as internal neurotransmitters), their receptors, nerve cells (neurons), neuron pathways and other cells that enable function of this complex system.

People naturally synthesize endocanabinoids, whose blood concentration is directly dependent on numerous physiological and external circumstances and may be conditioned even by the behaviour of the human being. Thus, immediately after training, specifically after running, individual generates higher concentrations of endocanabinoids what results in a sense of euphoria and happiness after training.

It should also be mentioned that in the endocanabinoid system there are enzymes responsible for the degradation of endocanabinoids. We call them hydrolases of fatty acid amides.

What should be mentioned in the context of the Maca’s activity that in several in vivo studies, the lipophilic components of the roots can act as the blockers of endocanabinoid degradation. Once Maca has been consummated, due to this effect allows a stable concentration of endocanabinoids in the body. This action has yet to be confirmed by the clinical model of study.

Therefore, it is speculated that the Maca can positively affect the processes of neurotransmission in the central nervous system and acting to protect neurons through the endocanabinoid system.

As a result, Maca has a positive physiological effect on many functions including: hormone production, neurotransmitter regulation (such as production of serotonin), alleviation of pain, improving mood; it also has protective effect on the nervous system and memory capacity, as well as other abovementioned effects (enhanced fertility and better memory). 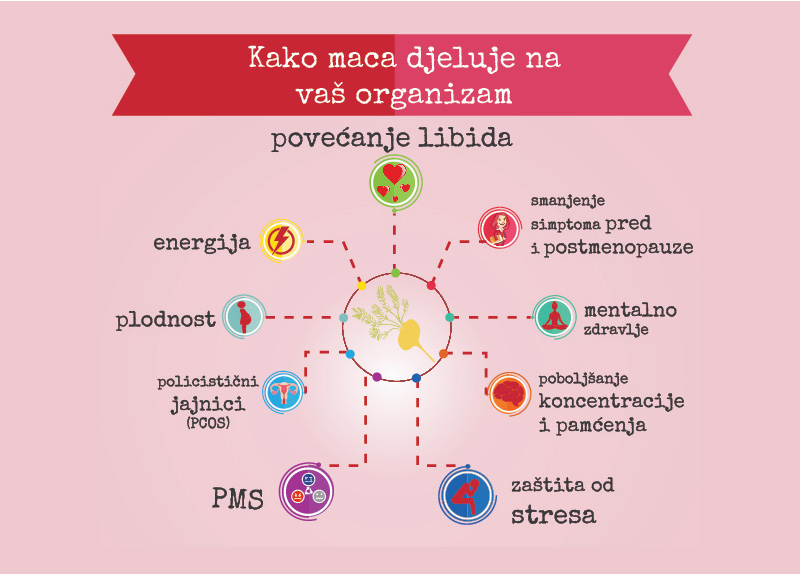 Such effect(s) may mediate during the overload of adrenal glands, during pronounced stress and fatigue. In reality, secondary metabolites, such as macamides, potentially act like natural anti-stress molecules that protect the nervous system and allow the body to balance and build long-term resistance to over-stress conditions.

Of all the above, it can be concluded that the Maca has an interesting biological activity because of a whole range of chemical ingredients – the wealth of macronutrients (proteins, fats and carbohydrates), micronutrients (iron and calcium and others), but primarily due to naturally occurring substances and secondary metabolites.

They are not produced in the root of the Maca, but appear due to changes after plants thermal treatment, i.e. through the process of gelatinization.

Although more detailed data and scientific studies are needed, preliminary and available data assume that the Maca works favourably on the basic modus of regulation of the neurohormonal system: the hypothalamus-pituitary axis, as well as on the endocanabinoid system.

previousWhy is the Maca super food?