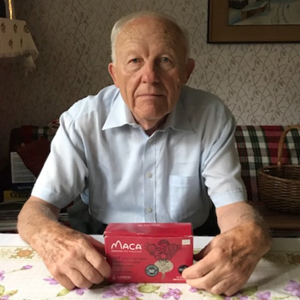 Although there are currently nine identified phenotypes of the Maca, most of them fall into three different types: a yellow Maca, a red Maca, and a black Maca. All three species are beneficial to the human body, but it is important to choose the one that has particular benefit on some health conditions.
Thus for the men suffering from prostate problems is recommended red Maca because it is proven to reduce the size of the enlarged prostate due to regular taking of 5 to 10 g of Maca per day. Bioandina’s gelatinized red Maca over a period of more than two months was also tested by Mr. Slavko Kreševac from Zagreb, whose testimony we bring here uncensored.
Our Bioandina team is extremely grateful for every bit of information from our customers, and there is no better feeling for all the effort we have invested than to hear and see from the satisfied customer.

’Red Maca is a salvation for my prostate

Although I’m over 80 years of age, I can say that I’m in pretty good shape. I’ve never been seriously ill what I can thank to some of the hereditary, genetic issues as well as a neat, balanced way of life. I eat neatly, avoid alcohol and strive to move as much as I do – I do work in the garden and walk almost every day. Despite all this measures, I did not manage to avoid prostate problems.
Like most men in the senior ages, my prostate has begun to cause health problems. At first I thought I would only “feel it,” but very quickly the situation became more serious to the point that I could not urinate, which is why I’ve got a catheter and a stronger dose of medication. And finally I ended up on the operation table. Apart from the physical problem, which is extremely uncomfortable, a prostate problem adds an additional stress for everyday life. So every departure to the nearby store represents a carefully planned project because you never know when the prostate will “squeeze” you while the toilet is not nearby. And then again, you felt constantly “squeezed” and you have the feeling that you’ve spent all day on toilet.
After the surgery I decided to inform myself about dietary supplements that could help me: I tried various products, but the results were not significant. I was trying to extend a benevolent period after surgery because, as the doctor informed me, it was just a temporary solution to my problem that eventually will return.
It took no more than two years and the problems did return. Frequent urination and pressure in the lower part of the stomach, the need for urination, and the inability to do the same and other unpleasant symptoms returned as out of the blue and have become more seriously with every passing day. At that moment, I got a box of a red Maca as a gift from my cousin. I did not know what the exact word was for that; she’s just advised me to try it because she knew that it would help me. I started taking one bag daily, in the morning, diluted in the glass of a fruit juice. Honestly, I did not expect a miracle, but I wanted to try anything because for the prostate in such condition it was no joke.
After 10 days, I’ve noticed an improvement. The pressure decreased, as did the number of departures to the toilet, and the urination became easier, I might say – painless. On the other hand, I felt fit all day, as if my energy level has increased.
My cousin told me to try to increase the dose on two bags a day. So now I have one at the time of a breakfast, and I also take one bag at the lunch time. Within a week, I did not feel any problems with the urination as well as with the digestion. Generally, I feel stronger; I have more liveliness and can be active all day long. I believe that part of now this general well-being is a psychological relieve of prostate problems. For almost 45 days, since I’ve been taking red Maca every day, for 2 bags of 5g each a day for over a month, I can say that I’m extremely happy with the results and that I will not stop using it.’’

nextGelatinized Maca (does not contain gelatin)