Despite the fact that the Maca is plant’s root, its border between food and herbal plant species: Maca is classified into the same family as kale and broccoli, and has a rich tradition of application in phyto-therapy because of its specific root composition and function.

Why is Maca adaptogenic plant? And what does that mean?

Maca is, above all, an adaptogenic plant. Such plants possess an agent or an active substance that supports homeostasis – the physiological balance of the organism, directing it towards better resistance to physiological stress.

Adaptogens have the ability to raise overall non-specific resistance of the organism, allowing the body to adapt to the stressful circumstances without having a phase of exhaustion – that is inherent to stimulants.

The chemical composition of the Maca’s roots varies depending on the area where the Maca is cultivating and its quality changes and varies, and if it is, for example, from the Andes Plateau transferred and cultivated in China, and if it has grown at different altitudes.

However, as with any plant species possessing specific biological activity, the explanation and identification of the active substances needs to be better understood.

What are the active substances in Maca?

It is believed that for the physiological effects of the Maca are responsible specific, naturally occurring substances, which we call secondary metabolites.

Maca unlike some plants, such as red clover, black cohosh or soy, DOES NOT contain phytoestrogens or phytoestrogen-like substances.

Professional and scientific work of Gloria Chacon, a scientist who devoted a significant part of her opus studying the activity of the Peruvian Maca during the 1960s, provided basic insights into the activity and active ingredients of Maca. Chacon then considered that the beneficial effects of the Maca’s roots could be attributed to the effect of their alkaloids. However, recent studies of the Maca’s biological effect attribute to the overall effects of the aforementioned secondary metabolites, and not to only one isolated group of compound(s).

In addition, the shape of the plant itself is important, so with the thermal treatment (gelatinization), the number of secondary metabolites increases. 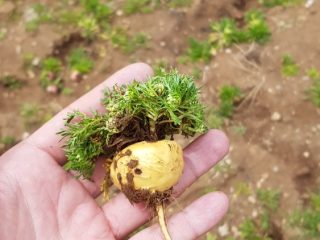 The root of the yellow maca 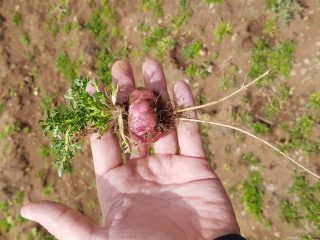 The root of the red maca

The root of the yellow maca

previousGelatinized Maca (does not contain gelatin)

nextHow does Maca act on a body?